SUMMARY OF THE INVENTION.

"The present invention has a main object of providing a method of manufacturing a rigid internal gear made by integrating a tooth forming ring and a main gear ring, the tooth-forming ring composing only a part in which the internal teeth are formed and being formed of a material which superior strength and abrasion resistance and the main gear ring composing a remaining part and being formed of a lightweight material, the method being able to reliably integrate the two rings."

The internal ring gears are commonly used for planetary transmissions and gear actuators. The US Patent 6874231 describes a design concept when [sic] "a ring internal gear… is composed by integrating a tooth-forming ring 12 formed with internal teeth, and a main gear ring 11 into a single body…In more details, the present invention pertains to a method of manufacturing a rigid internal gear that is made lighter with no loss in strength." 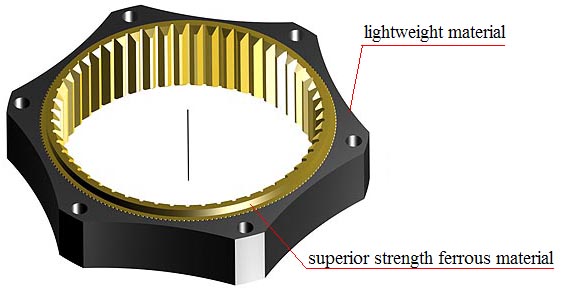 "What is claimed is:

the method comprising steps of:

forming the main gear ring from a first material that has a first linear expansion coefficient;

forming the tooth-forming ring from a second material that has a second linear expansion coefficient; and

Use of metals a structural materials has been significantly reduces on new built airplanes. For example the new Boeing 787 and Aerobus A380 are built 50% out of metals and 50% out of lightweight advanced materials. Different bonding methods may be used for bonding metal gear inserts into fiber reinforced plastic materials.

The United States Patent 5875693 describes a concept of the [sic] "body formed entirely of glass-fiber-reinforced plastic material with a gear insert molded therein."

The patent 5875693 is referring to glass fiber reinforced material commonly known as fiberglass. Using glass fibers as the reinforcement has proved to be a reliable and low cost in this particular application of insert molded ring gear. The advantage of using of glass fibers in patent 5875693 is its non-electric conductive properties. Fiberglass is a good insulator that prevents electric current between the metal ring gear insert and non-conductive fiber reinforced composite housing. Because of the electric insulating properties of glass fibers it provides high resistance to galvanic corrosion in bonding with the internal ring gear. The bonding strength between the metal ring gear and the fiber reinforced plastic housing has been tested during a number of years of successful use of this product by consumers. Accordingly to the Snap-On Tools sales representative in Charlotte, NC it is practically impossible to brake the bonding connection between the metal gear insert and the fiber reinforced composite housing.