ZAKGEAR has developed software for design and manufacturing of the Globoid Gear that was considered by New Venture Gear as a compact alternative for hypoid and spiral bevel gears in low ratio applications.

In automotive power train applications like front and rear drive axles, power take-off units, traction systems and mechanical amplifiers using a new gear could save space up to 30 % and significantly reduce weight. It could be used in power windows and power seats, steering drives.

In the traditional engineering practice globoidal (double enveloping) gears have been used with the ratio 1:5 and higher. hypoid and spiral bevel gears are always been used in the lower ratio applications. For the ratio less than 1:5 UGG can be more efficient than a right angle gear. UGG has higher percentage rolling/sliding motion and excellent dynamic lubrication. It has extending life even without lubrication. UGG can replace any right angle gears, especially in power sensitive applications, like helicopters, ships, boats and cars.

Each thread of the pinion most of the time is in mesh with two teeth. It reduces impact of engagement and disengagement, increases the contact ratio and makes quieter motion.

It was found that by using existing gear cutting machines UGG can be produced at lower cost compare to hypoid or spiral bevel gears. For some configuration forging technology or power metallurgy could be applied as well. There are very broad opportunities for the UGG made out of plastic. 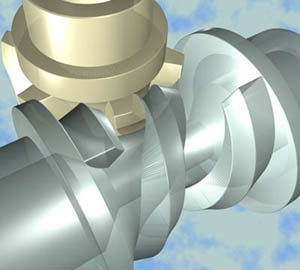 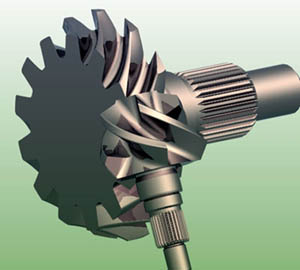 TRANSMIT MORE POWER WITH SMALLER GEARS.
Unfortunately the UGG development project at New Venture Gear has not been completed because of company’s bankruptcy.